I LOVE women!!! And not just for the more obvious reasons why a guy would love women. There’s a difference between loving women, and just wanting to fuck women. Excuse the blunt and vulgar language here, but I’m using it to make a point.

There’s men out there who want to fuck women, but in every other respect, they either dislike or even hate women. These are the kinda guys who have the chrome profiles of busty broads on the mudflaps of their trucks. Women as both sex objects and mudflaps… Need I say more? Actually, I could say a lot more about men who hate women, but still want to fuck them. But who wants to dwell on that? So enough said.

Do I love having sex with women? Of course I do! But I also love talking to them and listening to them, because women have a whole different point of view about life, and I’m a guy who finds all you ladies to be fascinating for your thoughts and what’s between your ears, even more than I’m attracted to what’s between your legs.

And as far as I’m concerned, the following is an eternal truth:

The happier that we men make women, the happier we men will be as a result. But unfortunately, not all guys grasp this… And this is why I need to post the following public service announcement. I did not write it, but I most definitely learned from it when I first read it many years ago, and I’m hoping that maybe some other guys out there will learn from it as well. 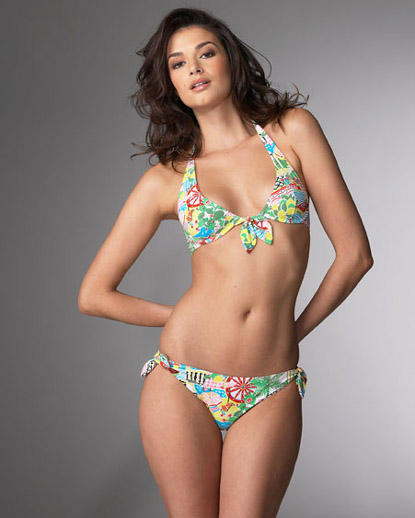 So here it is:

40 MISTAKES MEN MAKE WHILE HAVING SEX WITH WOMEN
.
1) IGNORING THE OTHER PARTS OF HER BODY. A woman is not a highway with just three turnoffs:
Breastville East and West, and the Midtown Tunnel. There are vast areas of her body which you`ve ignored far too often as you go bombing straight into downtown Vagina. So start paying them some attention.
.
2) BLOWING TOO HARD IN HER EAR.
Admit it, some kid at school told you girls love this. Well, there`s a difference between being erotic and blowing as if you`re trying to extinguish the candles on your 50th birthday cake. That hurts.

.
3) NOT SHAVING.
You often forget you have a porcupine strapped to your chin which you rake repeatedly across your partner`s face and thighs. When she turns her head from side to side, it`s not passion, it`s avoidance.

4) SQUEEZING HER BREAST.
Most men act like a housewife testing a melon for ripeness when they get their hand on a pair. Stroke, caress, and smooth them.

5) BITING HER NIPPLES.
Why do men fasten onto a woman`s nipples, then clamp down like they`re trying to deflate her body via her breasts? Nipples are highly sensitive. They can`t stand up to chewing. Lick and suck them gently. Flicking your tongue across them is good. Pretending they`re a doggie toy isn`t.

6) TWIDDLING HER NIPPLES.
Stop doing that thing where you twiddle the nipples between finger and thumb like you`re trying to find a radio station in a hilly area. Focus on the whole breasts, not just the exclamation points.

7) NOT KISSING FIRST. Avoiding her lips and diving straight for the erogenous zones makes her feel like you`re paying by the hour and trying to get your money`s worth by cutting out nonessentials. A proper passionate kiss is the ultimate form
of foreplay.

8) GETTING THE HAND TRAPPED.
Poor manual dexterity in the underskirt region can result in tangled fingers and underpants. If you`re going to be that aggressive, just ask her to take the damn things off.

9) LEAVING HER A LITTLE PRESENT.
Condom disposal is the man`s responsibility. You wore it, you store it.

10) ATTACKING THE CLITORIS.
Direct pressure is very unpleasant, so gently rotate your fingers
along side of the clitoris.

11) STOPPING FOR A BREAK.
Women, unlike men, don`t pick up where they left off. If you stop,
they plummet back to square one very fast. If you can tell she`s not there, keep going at all costs, numb jaw or not.

12) UNDRESSING HER AWKWARDLY.
Women hate looking stupid, but stupid she will look when naked at the waist with a sweater stuck over her head. Unwrap her like an elegant present, not a kid`s toy.

13) GIVING WEDGIE DURING FOREPLAY.
Stroking her gently through her panties can be very sexy. Pulling the material up between her thighs and yanking it back and forth is not.

14) BEING OBSESSED WITH THE VAGINA.
Although most men can find the clitoris without maps, they still
believe that the vagina is where it`s all at. No sooner is your hand down there than you`re trying to stuff stolen banknotes up a chimney. This is okay in principle, but if you`re not careful, it can hurt – so don`t get carried away. It`s best to pay more attention to her clitoris and the exterior of her vagina at first, then gently slip a finger inside her and see if she likes it.

15) MASSAGING TOO ROUGHLY.
You`re attempting to give her a sensual, relaxing massage to get her in the mood. Hands and fingertips are okay; elbows and knees are not.

16) UNDRESSING PREMATURELY.
Don`t force the issue by stripping before she`s at least made some move toward getting your stuff off, even if it`s just undoing a couple of buttons.

17) TAKING YOUR PANTS OFF FIRST.
A man in socks and underpants is a at his worst. Lose the socks first.

18) GOING TOO FAST.
When you get to the penis-in-vagina situation, the worst thing you can do is pump away like an industrial power tool – she`ll soon feel like an assembly-line worker made obsolete by your technology. Build up slowly, with clean, straight, regular thrusts.

19) GOING TOO HARD.
If you bash your great triangular hip bones into her thigh or stomach, the pain is equal to two weeks of horseback riding concentrated into a few seconds.

20) COMING TOO SOON.
Every man`s fear. With reason. If you shoot before you see the whites of her eyes, make sure you have a backup plan to ensure her pleasure too.

21) NOT COMING SOON ENOUGH.
It may appear to you that humping for an hour without climaxing is the mark of a sex god, but to her it`s more likely the mark of a numb vagina. At least buy some intriguing wall hangings, so she has something to hold her interest while you`re playing Marathon Man.

22) ASKING IF SHE HAS COME.
You really ought to be able to tell. Most women make noise. But if you really don`t know, don`t ask

23) PERFORMING ORAL SEX TOO GENTLY.
Don`t act like a giant cat at a saucer of milk. Get your whole mouth down there, and concentrate on gently rotating or flicking your tongue on her clitoris.

24) NUDGING HER HEAD DOWN.
Men persist in doing this until she`s eyeball-to-penis, hoping that it will lead very swiftly to mouth-to-penis. All women hate this. It`s about three steps from being dragged to a cave by their hair. If you want her to use her mouth, use yours; try talking seductively to her.

25) NOT WARNING HER BEFORE YOU CLIMAX.
Sperm tastes like sea water mixed with egg white. Not everybody likes it. When she`s performing oral sex, warn her before you come so she can do what`s necessary.

28) MAKING HER RIDE ON TOP FOR AGES.
Asking her to be on top is fine. Lying there grunting while she does all the hard work is not. Caress her gently, so that she doesn`t feel quite so much like the captain of a schooner. And let her have a rest.

30) TAKING PICTURES.
When a man says, “Can I take a photo of you?” she`ll hear the words “__to show my buddies.” At least let her have custody of them.

31) NOT BEING IMAGINATIVE ENOUGH.
Imagination is anything from drawing patterns on her back to pouring honey on her and licking it off. Fruit, vegetables, ice and feathers are all handy props; hot candle wax and permanent dye are a no no.

33) ARRANGING HER IN STUPID POSES.
If she wants to do advanced yoga in bed, fine, but unless she`s a Romanian gymnast, don`t get too ambitious. Ask yourself if you want a sexual partner with snapped hamstrings.

36) BARKING INSTRUCTIONS.
Don`t shout encouragement like a coach with a megaphone. It`s not a big turn-on.

37) TALKING DIRTY.
It makes you sound like a lonely magazine editor calling a 1-900 line.  If she likes nasty talk, she`ll let you know

38) NOT CARING WHETHER SHE COMES.
You have to finish the job. Keep on trying until you get it right, and she might even do the same for you.

39) SQUASHING HER.
Men generally weigh more than women, so if you lie on her a bit too heavily, she will turn blue.

40) THANKING HER.
Never thank a woman for having sex with you. Your bedroom is not a soup kitchen.

I think that 98.9 % of what’s here is good advice, but I don’t agree with every single word of it. Because there are always different strokes for different folks – both male and female. Perhaps you, my readers, both male and female, might want to voice your opinions here, of what you think. Personally, my biggest objection is to # 40 – I don’t think that there is anything wrong with a man thanking a woman for having sex with him. If it was really great, then why not tell her so? And thank her!
.
I say “Thank you” to my wife, every single time, and it’s not like begging at a soup kitchen at all. It’s sincere and heartfelt gratitude every time, and I know that she genuinely appreciates hearing it…
.

I’m a 56 year old guy who is young (and immature) at heart, and I love humor and laughter. Married for 22 years, but still enjoy all the glories of womanhood everywhere, even while dedicated to one woman only - and I hope my wife never finds out about her!
View all posts by Chris Sheridan →
This entry was posted in Humor, Personal and tagged advice, better sex, entertainment, great sex, humor, love, marriage, men, Personal, relationships, sex, understanding, women. Bookmark the permalink.