Posted on February 9, 2012 by Chris Sheridan

I came home early from work today, cause I feel like I’m coming down with the flu. I guess that I must look as sick as I feel, cause just before I went home, three different co-workers thrust crosses up at me, while backing away in terror and shouting “GET THEE AWAY FROM ME THOU CURSED EVIL UNDEAD!!!” If I hadn’t been feeling so sick, it would have been pretty cool!

So, everybody all ready for VALENTINEORAMA??? It’s only six days away till LOVE DAY!!! I have a kind of mixed love/hate relationship with Valentines Day. Some years I can get into it, and other years I’m just not in the mood to be all romantic on cue, so Hallmark can sell more overpriced VD cards.

Last year my wife and I celebrated VD with a long weekend, since February 14th was on a Monday. It was one of those long weekends that was the best of times and the worst of times, because she and I got off to a bad start over some petty shit not even worth mentioning. But it was still enough to cause a nasty fight and we definitely weren’t feelin’ the VD Love that first night and into the next day. And that’s when I’m just in no mood for all the VD commercial bullshit, with all the frilly hearts and flowers and seriously overpriced restaurant menus.

It all just made me feel so supersaturated with Valentines this and Valentines that, that I wanted to blow Cupid out of the sky like shooting skeet with a shotgun! Let’s see how your little bow and arrow fares against a flying pattern of buckshot, ya little fairy! 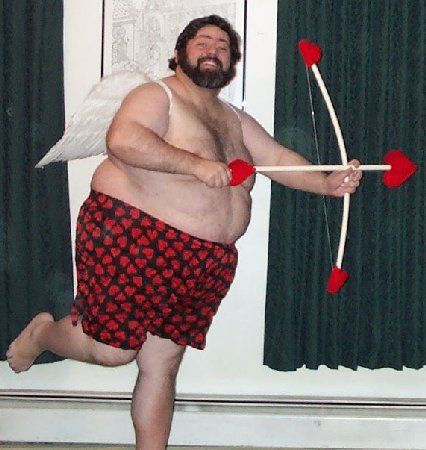 Okay! Okay!!! I’ll stop now! I know it’s probably no fun for some of you to read about a guy trashing Valentines Day! So I have a dark side sometimes! I still keep it hidden most of the time! Ya gotta give me some credit for that. I’m sure there were times when even Valentino said “Fuck this shit! I’m goin’ out with the guys tonight!”

I guess that when I overdose on the sickly sweet sugar of excessive Hallmark card sentimentality, it makes me crave some black humor, shocking mock depravity and biting sarcasm. It’s like I need an antidote for it all as a reality check.

Okay the rant is over, and I’ve calmed down now… I’m still Chris, still the funny guy who loves to make people laugh, still the perv who pushes the envelope of the limits of tolerance with lots of sexual innuendo, while trying to be charming enough to get away with it… and not always succeeding. Lol ;-) It’s still me, and I’m pretty sure I haven’t lost my mind, though I’d understand if some of you aren’t so sure about that right now.

And in case anyone wonders, after all my ranting, my wife and I did manage to stop fighting and make up during our VD weekend last year. After our rocky start, we got it right again and we had a wonderful and romantic two days, filled with fun and laughter as a middle aged man and woman (I was the man last year) became young again, teasing and playing with each other like a couple of teenagers, and necking on the couch. There was candle light, a dozen red roses with a few brief love poems hidden beneath the blooms, and the warmth of a hot and bright orange flamed fire dancing in the fireplace.

Then the teenagers stopped playing and resumed their roles as adults, being husband and wife, but still feeling young again. There was that rare and incredible passion of knowing a lifetime lover so well, anticipating and understanding each others every move, facial expression, murmur and quiver, and the timing of silent desires communicated but unspoken. There was that perfect flowing dance of partners who have danced together for years, and then the inevitable and wonderful rush of reaching the heights together again, as we were one flesh, one soul, intimately bonded both physically and spiritually, and loving each other more than we love our own lives.

There was a photo album of 24 years of shared memories, and a mutual conviction that while the waves of adversity and strife have long pounded the foundation of our marriage, that foundation has held together and is now even stronger, and still ready to face whatever future storms may come. We will face them together as we have from the beginning, and throughout the many years since, and through it all we will love each other, as we have always loved each other, until the end.

Hey, has anybody heard the one about the one eyed donkey and the preacher’s wife? You will when I write my next post… I promise. :-)

I’m a 56 year old guy who is young (and immature) at heart, and I love humor and laughter. Married for 22 years, but still enjoy all the glories of womanhood everywhere, even while dedicated to one woman only - and I hope my wife never finds out about her!
View all posts by Chris Sheridan →
This entry was posted in Humor and tagged humor, husband, life, love, marriage, men, Personal, relationships, romance, sacasm, satire, Valentines Day, wife, women, work. Bookmark the permalink.