But thankfully, today isn’t one of them! :-) At least not so far… (knocks on wood, knocks on head – same difference. lol)

Yesterday most definitely sucked. But I’m not going to talk about it here, because there’s not enough of a story to make it blog worthy. I’m just grateful that at least for now, that it’s over and today is looking much better!

What? You still really WANT to know about yesterday? Well, okay – But you have to promise not to laugh at me…

It was a crushing disappointment. I was just so sure that I had passed the audition and I was going to be cast as the lead for “JAWS! The Musical”. They even told me that the part was as good as mine, but then I got a call at the last minute, telling me they’d changed their minds, and the role of “Bruce, The Great White Singing Shark” went to another actor. I was so despondent and depressed, that I was starting to lose my grip on reality.

It got so bad that I wandered the local beaches in my shark suit and reenacted my audition for unimpressed total strangers. 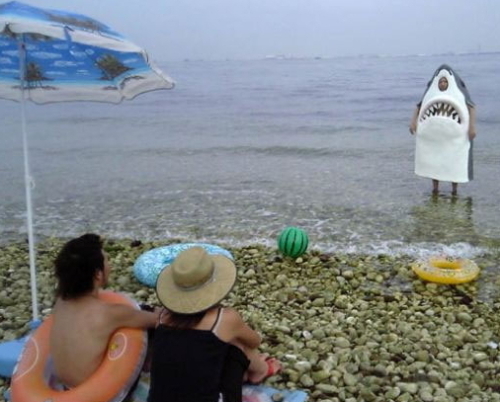 My sense of alienation and rejection only got worse, as each performance ended with yawns of indifference or cutting and sarcastic comments… I sank deeper into the depths of despondency.

And then my mental state got even worse, when last night I was plagued by persistent and recurring nightmares, of what happens when fruit goes bad. 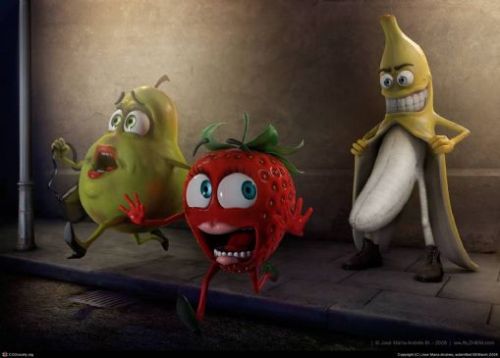 But that’s all behind me now, and I’m feeling much better today.

Hey, so what does everybody think of this new thing on WordPress, where you can see all the countries in the world where the hits on your blog are coming from? I think it’s kinda cool! Especially the world map of where your blog has been. Here’s mine: 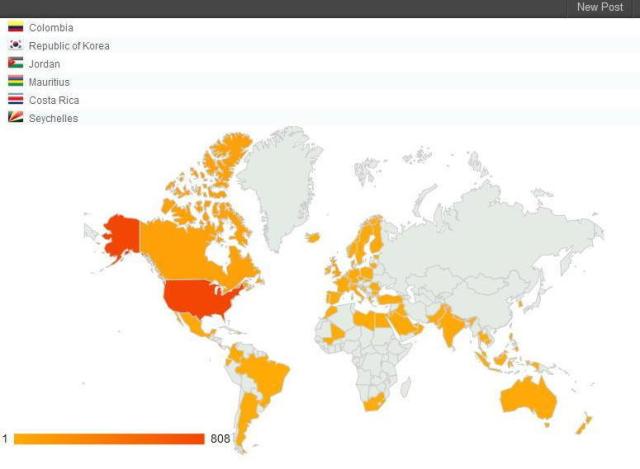 Here is my blog’s World Empire! Kinda makes me feel like Alexander the Great in a delusional sort of way. Lol :-) Except that he did much better in Asia than I have, but hey, that can change! Just give me enough time, and those Asians and Russians will come around. Rome wasn’t built in a day! Or even three months and 10 days… which is how long I’ve been blogging on World Domination Press now. Lol

I’ve done surprisingly well in almost all of the Middle East, and Saudi Arabia is 10th on my top ten list of countries with the most hits on my blog. Who knew? I guess the Middle East is a region that could use a good laugh these days… and I’ll try to do what I can.

But now I’ve got a bone to pick with Greenland… That’s where I wanna start seeing some real action with my hits! Just because you’re a vast nearly uninhabited land mass of frozen tundra and glaciers is NO excuse! I’ve got lots of action from Canada and that shade of orange representing Canadian love of my blog extends way up past the Arctic Circle – so no bullshit excuses about you being too far north Greenland!

Get with the program or my next post will be a scathing denunciation of big white and very blank Greenland, which apparently represents your collective intellectual blankness and lack of a sense of humor. You think you’ve got problems with global warming melting your ice cap right now? Wait until I turn up the heat on you, Greenland! Let’s start seeing some hits, and I mean now!

Or my wife and I will start making faces at you!

And if you think that was bad, wait till we start mooning you, Greenland! Consider yourself warned…

I’m a 56 year old guy who is young (and immature) at heart, and I love humor and laughter. Married for 22 years, but still enjoy all the glories of womanhood everywhere, even while dedicated to one woman only - and I hope my wife never finds out about her!
View all posts by Chris Sheridan →
This entry was posted in Humor and tagged Blog, humor, life, Nations that love me, Personal, World Domination, writing. Bookmark the permalink.