I just happened to open up my blog stats for the first time in three weeks, and THIS is what I saw:

Looks like during my nearly month long absence from WP, that my blog has been doing just great without me! Lol – Maybe I should never write a new post again, and keep this raging out of control statomania thing going on!!!

Okay, now I know that 45,000 total hits on your blog is just small potatoes to some of you WP Heavyweight Superstars out there… And you should just get over yourselves! (Just kidding!)

But here is what is a big deal to me: Since my last post, back on August 2nd, my blog has picked up over 10,000 hits without me doing anything! I am also admittedly overly impressed, that when I checked my stats today just on a whim, that my total hits were on an even number of 45,000! And what is the majorly earth shaking significance in that? Absolutely nothing! I just think that it’s kinda cool, because I’m just kinda that way… Lol

So maybe you are wondering why my blog picked up over over 10,000 hits while I’ve been totally ignoring it??? Or maybe by now, you are no longer reading such a silly post as this one, and you are busy texting, or trying to make a living at work, or maybe even writing your own post… Hey, in that case, no hard feelings, and I don’t blame you one bit!

But for those of you who are still reading, whether out of morbid curiosity, or whatever your reasons may be, and you are entitled to them… this is the reason why I have picked up over 10K blog hits while doing absolutely nothing:

Just one post that I wrote back in February of this year, called Staring at Her Elephant This thing just refuses to die, and the Internet can’t get enough of it! And so what, if it’s for ALL the wrong reasons! Success is Success, however it is achieved; right?

But enough on that, and end of discussion…

My wife and I had a wonderful vacation in Acadia National Park in Maine, and here is my favorite photo that I took, during our trip. 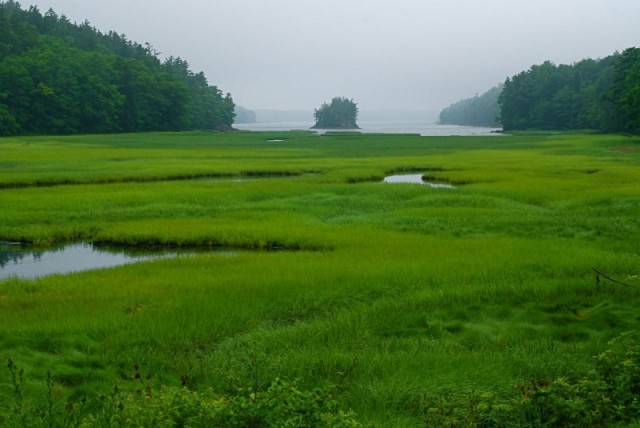 Love the rich green of the color in this one… which is how the scene looked when it was taken, and I posted it here without any photo editing.

Well, soon I have to leave for an eye exam, so I’ll leave you with a funny story from when I was a kid. My thanks go to Sheena of Facehookin’ for inspiring this one, which was originally a comment on one of her recent posts.

I was 10 years old and staying for a week in the summer, with my friend’s family, in a cabin in coastal Maine. We had steamed clams for dinner and although I loved eating them, after we went to bed, it was no fun when I felt like those steamed clams were coming back up!

But I had a real problem, which was that my friend and I were sleeping up in a loft near the roof of the cabin, and the only way down to where the bathroom was on the floor below, was via a ladder, and I knew I’d never get down that ladder in time, before those clams were coming up and out! I yelled for help to my friend’s mother, who instantaneously understood my problem, and instantly responded by throwing a large pot 10 feet up towards me while I was still up in the loft.

Mom’s throw was right on target and so accurate that it would have made both Peyton Manning and Tom Brady jealous! I caught the pot and 5 seconds later the pot caught my entire plate worth of spewed up steamed clams!

A real example of how Moms can do truly amazing things when the game is on the line, with only 6 seconds left on the clock!

Mom throws! And it’s caught in the end zone for a TOUCHDOWN!

Catch you all later, cause I gotta get to that eye exam!!!

I’m a 56 year old guy who is young (and immature) at heart, and I love humor and laughter. Married for 22 years, but still enjoy all the glories of womanhood everywhere, even while dedicated to one woman only - and I hope my wife never finds out about her!
View all posts by Chris Sheridan →
This entry was posted in Humor, Travel and tagged Acadia National Park, Cyber-Accidents, Digital Photography, funny stories, humor, life, Meaningless Wordpress Stats, travel, WordPress stats. Bookmark the permalink.