As a man of many words, and often enough words to rival the volume of words in Websters Unabridged Dictionary, which sometimes results in my posts being just as interesting to read as a dictionary… today I have decided to write my shortest post ever!

Pretty damn shocking, huh? Well, not really… I just wanted to give my readers a heads up, to tell you that you might want to take a second look at my most recent previous post. I rewrote it yesterday, when I realized that the original version was definitely not ready for prime time. I am much more satisfied with the result of my revised version. It’s still too long, but still much better than the previous semi-incoherent and repetitive mess it was before, especially in the second half. Some extra humor has also been added, for better or worse.

Here, I’ll even make it easy for you and give you the link: Things Are Looking Up – Revised

Spoiler Alert!!! The photograph of the nude lovers on the beach has been removed, but the two F-bombs remain. No one complained about the photo, and I still think my choice of that photo was erotically tasteful and a good match for the content of my writing. I took the photo out because I thought my writing no longer needed a photographic illustration after I rewrote it, and my words were descriptive enough to create the image on their own.

However… I know that inevitably, some of you who didn’t see the photo, will be disappointed that you missed it. Or at least curious about what you missed… So here it is, and never say that I didn’t do you a favor! Lol ;-) 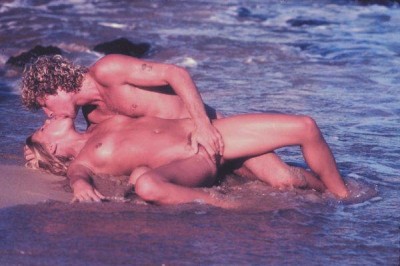 The F-bombs are still there, because although I know that some readers will find them offensive, which I do understand and respect, I think that using them still serves a valid purpose, within the context of my writing. Although I think that repetitive overuse of F-bombs can be annoying and also a cover for a lack of talent, one or two well placed ones can add to what a writer or performer is trying to express. And I do not support censorship.

In fact, I find censorship far more offensive than excessive profanity. If I don’t like the level of profane or pornographic content in what I am reading hearing or watching, my solution is to X out of the page online, close the book, change the channel, or walk out of the show… I do NOT go on a crusade to keep everyone else from reading, hearing or seeing what I personally find offensive.

I just don’t have that kind of superior sense of my own judgement or self righteousness to set myself up as a judge with the right to decide what other adults should or should not be allowed to see, hear or read, based upon my personal opinion. End of speech, in my defense of free speech, and freedom of expression.

On a lighter note, here is a preview of a photo that I added to my revised post, and believe it or not, for the sake of humor…

While I don’t expect my female readers to agree with me, I think she is a strikingly magnificent portrait of the power and wonder of feminine beauty. My only regret is that I have no idea who the photographer is, because he or she did a masterful job of capturing her in all her glory, and he or she deserves much credit and recognition for what I believe to be a true work of Art.

So how can it be, that I used her photograph to set up a joke in my revised post? Read it and find out… ;-)

And this is now no longer my shortest post ever… I honestly didn’t intend to, but I guess I lied. Or more accurately, I just can’t help myself, and my sincere thanks to those of you who put up with me, and all my excesses, both good and bad. :-)

I’m a 56 year old guy who is young (and immature) at heart, and I love humor and laughter. Married for 22 years, but still enjoy all the glories of womanhood everywhere, even while dedicated to one woman only - and I hope my wife never finds out about her!
View all posts by Chris Sheridan →
This entry was posted in Humor, Personal. Bookmark the permalink.